Every so often I watch this to fire myself up:

“If you want to work here, CLOSE.”

That’s it..no one cares that you are a nice guy, love your kids, etc.

I see the election in a similar manner: if you want to win, GET VOTES IN THE SWING STATES. Period.

So, what is going to work there? There appears to be three strategies:

1. Flip enough of the Trump vote in the key states.
2. Excite the large number of non-voters to show up and vote your way
3. Discourage just enough Trump voters to not show up.

I don’t see 3 happening. 2: well, I see no one exciting out there. Oh sure, some (e. g. Sanders supporters and some Warren supporters) will tell you that these voters will show if the plans are big enough..bold enough…they’ll show for THE FREE STUFF. Color me skeptical.

Ok, that is satire. Here is an honest article (non-voters in the mid-terms).

But then others go on to complain about government decisions (to shut stuff down) and then say it doesn’t matter.
You think enough of these will show up because of promises and plans?

So, I see our best option as “flipping a few voters”, probably by showing that Trump has conned them..hasn’t delivered on the promises he has made to them. Yes, the stock market is doing well..that is good for ME at the moment, but is it for everyone?

So, how are we going to do that?

I don’t think we will do it by calling Obama’s VP a racist. Yes, I heard the disclaimer at the start. Here is the video.

Oh, this did give her a temporary bump in the primary polls. But I can see the attack: “ah, those Democrats…they call EVERYONE racists…even Obama’s VP.” Why would this bring anyone into our tent?

Yes, ok, politics isn’t bean-bag, and she was trying to dig into Biden’s support…and he currently has a lot of black support. And as far as bussing….well, that is a complex issue..not sure one I’d want to raise.

Now about Biden’s response: this did put him in a “no-win” situation, as far as Democratic voters are concerned. Had he hit back hard, he would have been seen as “punching down” as he is a “OLD WHITE MAN” and she is a “WOMAN OF COLOR” (woke liberals are all about “privilege”, who has it, who doesn’t, and it is seen as bad form for someone “with privilege” to hit back at someone who is “not privileged.”

BTW, here is a humorous video about the debates:

And yes, Noah’s assessment of the Biden-Harris exchange is a popular one among woke circles.

BUT, somehow…I doubt if Trump will play by those rules…he’d just say that she was just another angry activist angrily playing the race card..winking at the voters.

Now how did things shake out?
Morning Consult poll (not just a “before/after poll of debate watchers)

Trend: Biden down a bit, Harris up (almost doubled her support), most everyone else stayed within MOE of their support. 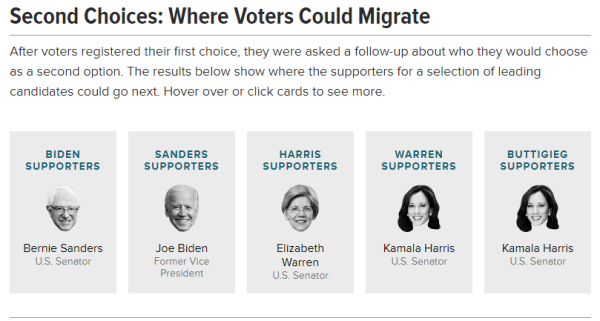 This sure smacks of “identity politics” but ..not only by the wokes.