Summary
The debate season for the 2020 presidential election kicked off with 10 Democratic candidates taking the stage in Miami and exaggerating or garbling the facts on Iran, wages, Medicare, the opioid crisis and guns.

Sen. Cory Booker claimed the Iran nuclear deal “pushed back a nuclear breakout 10, 20 years.” The deal pushed back the breakout time from two or three months to one year for at least 10 years.
Rep. Tim Ryan of Ohio said the bottom 60 percent of workers “haven’t seen a raise since 1980.” But two analyses of wage growth for the bottom 50 percent show some increase in wages since then.
Booker claimed private insurance overhead was 15 percent, while Medicare’s was “only at 2 percent.” But the comparison is disputed, and not apples-to-apples.
Booker said when Connecticut enacted a permit-to-purchase gun law, “they saw 40 percent drops in gun violence and 15 percent drops in suicides.” Two studies did find an association with such drops in gun violence and suicides, but they didn’t say the decline was caused by that law.
Former Texas Rep. Beto O’Rourke misleadingly said Purdue Pharma had paid “no consequences … not a single night in jail” for its connection to the opioid crisis. There hasn’t been jail time but the company and executives have agreed to pay hundreds of millions in fines and settlements.
Booker also said “about 30 percent of LGBTQ kids … do not go to school because of fear,” a statistic backed up by a 2017 survey that found those students missed one day of school or more in the prior month.

BASED ON THE DEBATE ONLY (not on resume, or prior position coming in)

1. Booker (full of energy, confidence, spoke accurately; looked Presidential)
2. Castro (very knowledgeable…well spoken)
3. Gabbard (yes, I am not supporting her, but she came across well and just tore into Ryan when he made his stupid “Taliban attacked us on 9/11” remark.
4. Klobuchar: no nonsense, steady..not sure she appealed to many
5. Warren (OMG, her voice and delivery makes me want to scream SHUT UP at the TV; I’d like her better if I muted the TV and put on subtitles. And too many outlandish promises)
6-9. The “whodis” group: De Blasio, Ryan, Inslee, Delaney
10. O’Rourke: he is toast. Not sure if this is a bad night or that he just got exposed.

1. Helped themselves and it matters: Booker. He may well break into the top tier.
2. Helped himself and it might not matter: Castro. He did generate interest.
3. Helped herself, but it won’t matter: Gabbard. She is a fringe candidate but, IMHO, came across very well.
4. Stayed the same; probably good: Warren. If you loved Warren coming in, you loved her performance. If you didn’t like her coming in, you still don’t. But how much she helped/didn’t help herself will depend on how Sanders and Biden do tonight.
5. Stayed the same: probably bad: Klobuchar. She needed to break out. She didn’t. Good, solid, smart, hard working, but she has a back-bench quality to her; maybe a good VP candidate?
6. Down in flames: O’Rourke. Looked over his head.
7. The whodis group: took up space. I hope the DNC kicks them out of the next debate. 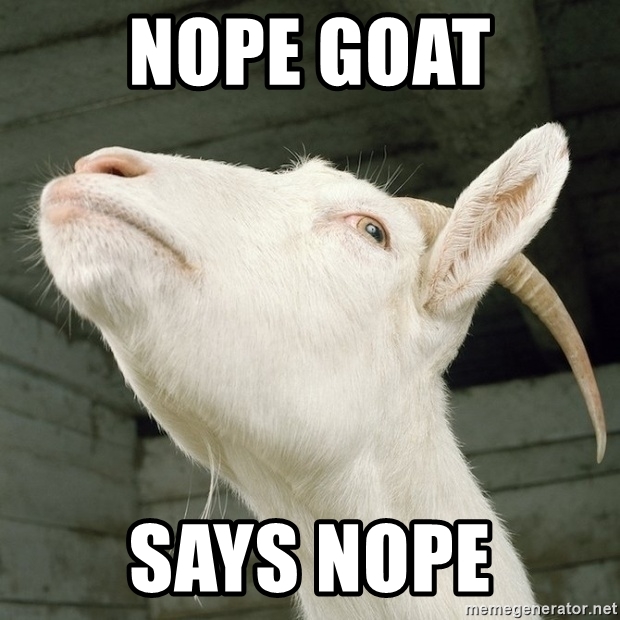 Caveat: I don’t know why I react the way that I do. My reaction to Booker: it might be that he reminds me of a solid military officer or of the coaches that I liked. But he just resonates with me.
Warren: I don’t know why she grates on me so much; it isn’t the policy ideas. And yes, I will vote for her if she wins the nomination and yes, I’d choose her over much of the rest of the field. This might change after tonight but so far my choices would be: 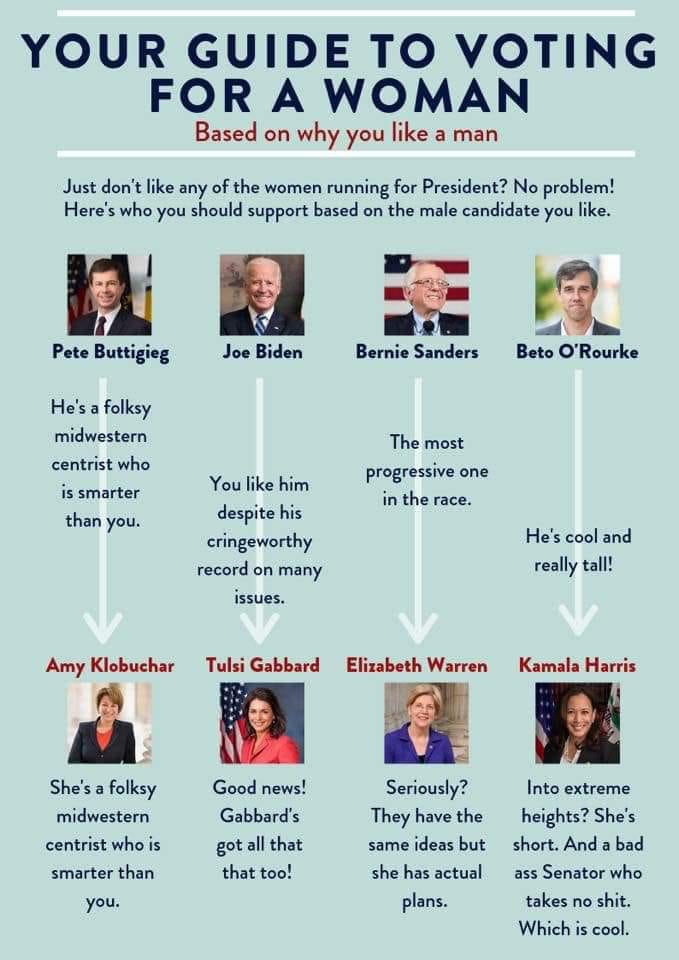 I understand this is political humor. And yes, Klobuchar is my first choice, and I’d pick Warren over Sanders any day of the week and, as you see, Harris is on my preferred list. Nevertheless…my knee jerk reaction to this sort of thing: “we have Trump in part because of the type of people who make such memes.” One can get in someone’s face and turn them against a position that they already hold! I wish the wokes understood this.

On the other hand, I if the meme is aimed at women and feminists, it might be good for a chuckle…and yeah..I did chuckle just a bit though I am not a feminist. 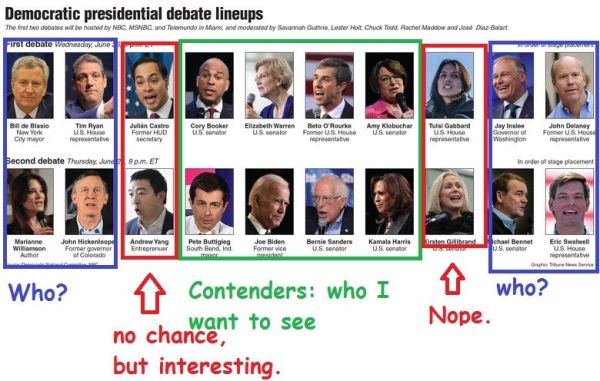 Seriously, I wish the DNC just let the top 8 got at it.

But I will watch..and see.

Never Trumpers: “We were lifelong members of a party that beat you like a drum at every level of government for years. We want to tell you how we did it.”

Woke Twitter: “But you didn’t beat Trump that one time, when we told you we’d run Hillary, so piss off.”

Yep…aside from Obama we’ve mostly taken a beating from Republicans. But we still won’t learn from them; at times, I think that some of us would rather keep our smug self-righteousness after a loss than do what is necessary to win.

Example of our unwarranted smug arrogance:

Big fan of @Eater but there's an obvious analogy to how Olive Garden is way more popular than the more progressive, premium, on-trend restaurants it reviews. https://t.co/rLiXaKSGUx

And yes, we are fully capable of losing this election.

About Trump In terms of policy, he is like Bush with the tax cuts. But in other areas, he is more moderate than, say, the 2000 Republicans.

What I think a lot of liberals don’t get is that Trump *is* the GOP moderating. https://t.co/kl1x8Muoj9

If you think back to the winter of 2004-2005 when Bush had just been reelected, the big item on the policy agenda was a looming plan to privatize Social Security and the GOP’s vote-getting gambit was a constitutional amendment to ban same-sex marriage.

Trump has surrendered on those topics, and we are now mostly fighting about ideas on immigration, health care, and education that were far too progressive for mid-aughts Democrats to contemplate.

I had not thought of it that way before.

It was warm outside. I was tired but did ok.