I’ve spent some time on Twitter, following mostly left-leaning accounts, but also running into some right wing ones as well. I’ll talk mostly about left wing accounts as that is what I am more familiar with. Also, most (but NOT all) of my friends lean left.

What I’ve noticed: there seems to be a fairly large number of people on Twitter (probably not a majority, by any means) who are:

1. angry (ok, I get that)
2. VERY self-confident in their opinions (why, I do not know)
3. KNOW that they are on the “side of what is right and moral” and
4. View others who disagree as evil and stupid and
5. View THEMSELVES and themselves ONLY as “the people”; those with opposing views are, well,…don’t count.

As far as 5: oh yes, Mitch McConnell and other Republicans constantly invoke their opinions as the opinion of the “American people”; that is what they do. But many others in the rank and file do this all the time. The very idea that their opinion is just one opinion among many and that there is no good reason to give special weight to it is just lost on them.

I suppose that is just human nature.

But one thing is bothering me: Senator Corey Booker and his “speaking truth to power” act:

.@CoryBooker on #Biden comments: At the end of the day I will never apologize for speaking truth to power… We need a leader that can heal a lot of longstanding pain and frustrations. A lot of present-day manifestations of those policies… #AMJoy pic.twitter.com/Bx01IipO53

Uh, Senator Booker: 1. How do you know that YOU are speaking “the truth” and

2. YOU are a US Senator…if YOU aren’t part of “The Power”, then who is???? Seriously; I have no interest in backing a victim for the highest office in the land.

Oh, I think I get it: in “wokeland”, WHITE MALES are the privileged and if you aren’t one of those, YOU don’t have the power; THEY DO. So when you wag your finger at them YOU are speaking “the truth to power” even if you are wealthy, successful and hold high office.

I am afraid that Ann Coulter (of all people) was onto something:

Ann Coulter says when Democrats take back control of the House of Representatives in January, there’s only one thing that will connect the diverse group of lawmakers: hatred of white men.

“They all hate one another,” Coulter said, discussing the alleged discord between members of the Democratic Party.

“I mean you, have the Muslims and the Jews and the various exotic sexual groups and the black church ladies with the college queers,” Coulter said, apparently describing the new group of Democrats elected to Congress in the 2018 midterm elections. The incoming class is the most diverse in history and includes the first Muslim congresswomen and the first Native American congresswoman.

“The only thing that keeps the Democratic base together is for them to keep focusing on: ‘No, white men are the ones keeping you down, you must hate white men.’ It’s the only thing they all have in common,” Coulter added as she appeared on Fox News as a guest on The Ingraham Angle on Tuesday.

"I mean you have the Muslims and the Jews and the various exotic sexual groups and the black church ladies with the college queers … you must hate white men. It's the one thing they have in common" pic.twitter.com/xGWe0wH2uP

And in wokeland, the more of these non-privileged groups you belong to (intersectionality) the more privilege you are granted to say YOU NEED TO DO IT THIS WAY.

And they become ENRAGED when you don’t acknowledge the “privilege” of the “non-privileged.”

And perhaps that is one reason why the current success of Joe Biden is making their heads explode; that perhaps THEY are out of touch with ordinary voters …well, that just can’t be.

I caught a couple of interesting Chiefs vs. Cedar Rapids Kernels games.

The Thursday one saw the Chiefs fall behind 2-1 before tying it with a home run in the bottom of the 7’th and, in the bottom of the 8’th going ahead on a 2 run home run. BUT in the top of the 9’th, it got interesting as the Kernels made an out, got a single, struck out and then 2 walks in a row. Bases loaded ..2 outs, but the next relief pitcher stuck out the final batter to preserve the win.

#BRYCEBOMB 💣 Denton homers to left center tying the game in the bottom of the 7th 🙌 #PTownProud pic.twitter.com/PuUBXEto4R

The Friday game: the Kernel pitching kept the Chiefs at bay, limiting them to 1 hit and leading 2-0 going into the bottom of the 9’th. Then after one out…back to back home runs! Tie game…and extras. But the Kernels drove in their “ghost runner” in the 11’th and the Chiefs stranded theirs to lose 3-2. 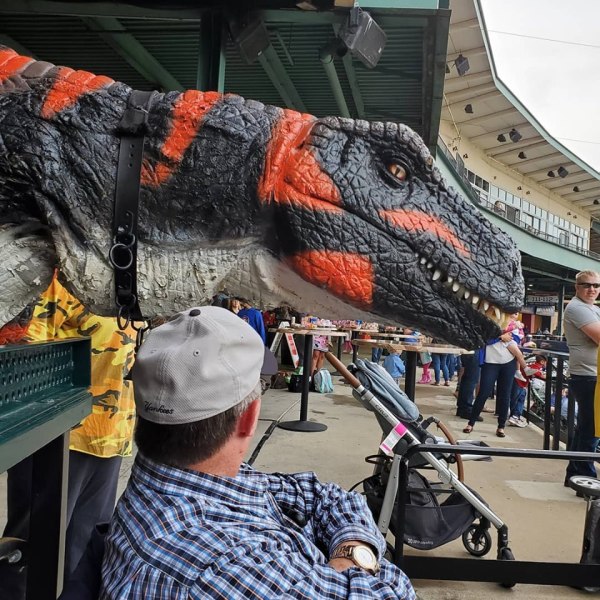 Perhaps the first mile split was a tiny bit short, but I was way too close to people who usually finish way ahead of me.

Rule of thumb: if I am right with a bunch of people that actually LOOK like runners, I am probably going too fast to sustain the pace.