IF you are a sports fan (NFL, NBA, MLB, or some other team sport) think about what happens when you cheer for your team: do you honestly think that the world will be a better place if your team wins? Honestly, that just isn’t a concern during the game, is it? You want your team to win, and you want your coach to coach to win and your players to play to win. That’s it.

And so, I turn to Senator Mitch McConnell’s book The Long Game. (New York Times review is here) 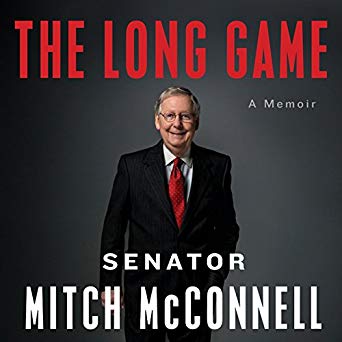 Yes, there is the obligatory attempts to humanize him (and some of it IS funny…for example, the story about then President Elect Bush during his inauguration asking him where his podium was; McConnell didn’t know for sure..but when the podium rose through the floor at the appropriate time, McConnell gave a cool nod as if he knew all along…)

You learn about his attempts to play baseball (flamed out before high school), and that he likes chicken enchiladas and sports cars. But over and over again, you hear about his love of professional baseball and the Louisville Cardinal football and basketball teams. That is a recurring theme. And, when you think about it, it is very telling.

What you do NOT hear about, at least in detail, is policy. Oh, there is the usual “The ACA bill is horrible”, “McCain-Feingold is horrible”, “Obama talks down to people”, “Obama is a far left politician”, etc., but it is very shallow boilerplate…Sarah Palin caliber stuff. The exception is the discussion of First Amendment issues as it related to the attempted flag burning amendment and to campaign finance reform. The discussion of why he supported sanctions on the apartheid South African government was also interesting.

But you’ll see no detailed discussion of foreign policy, supply side economics, conservative interpretation of law or anything like that. There was next to no mention of religion either.

And very tellingly, there is no discussion of how he wanted to make people’s lives better, or even enable them to live better lives.

The vast majority of the book was about two things:

1. His personal ambition. He made no bones about wanting to warrant a better office, attain membership on better committees, and to attain leadership positions..oh yes..and get elected.
2. His legislative victories; you can almost feel the gloating over his clever filibuster or clever use of the Senate rules to kill legislation he didn’t like or to attain the goals he wanted..and to get members of his team elected.

Moral and logical consistency were not issues for him. He decried Harry Reid’s “destruction of the Senate” (by using the rules to advance legislation) while dancing on the 50 yard line the times he did the same thing.
He decried Al Gore’s Senate theatrics and then described his own. He decried “show votes” (voting on something that the other chamber will not pass or that the President will veto) but then, IN THE NEXT LINE, admitting that he took them.

What matters to him is WINNING, period..he wants Team Republican to win. Now this might mean taking incremental victories here and there, even if it means getting attacked by “WE WANT IT ALL, NOW” activists (yes, Democrats have to deal with this too). Set things up…get better field position. Hence the title: The Long Game.

And winning (in terms of Team Republican) means winning votes, winning elections..and winning, on a personal level, means advancing. And he does offer quite a bit of insight here (e. g. the way to win a position is to run unopposed, and the way to do that is to lock up key support, early). And he planned, planned and planned some more. Hence the title: The Long Game.

Early in life, he took on jobs so as to better position himself for political opportunities in the future…evidently it wasn’t to serve constituencies. Hence the title: The Long Game.

Still, I was surprised at how little he talked about policy, either the philosophy of it or how it makes people’s lives better.

And that brings me to his discussion of President Barack Obama (called “Professor Obama”, as if that were an insult). Here and there he did praise him; he complimented his campaign, and how well he spoke about the TARP issues (called it “masterful”, without notes).

But he claimed that Obama spoke down to people in private, just like he does in public.

That claim got me scratching my head at first; one of the things I liked about Obama is that he didn’t insult me when he spoke. But after thinking about the praise that McConnell had for Joe Biden..and why he praised him, I think I got it.

Obama IS a policy heavyweight and is a pragmatist ..a problem solver. He sees a need in society and goes about trying to get that need met or that problem fixed; whether the solution is a traditionally conservative one or a liberal one doesn’t really matter to him. He is a thinker.

McConnell is NOT a thinker and is utterly disinterested in talking about the Laffer curve, what the data says about supply side economics, when a stimulus works or what the economists say the size should be, etc. So if Obama tries to explain to him why current Republican positions are really crank economics, McConnell is not only disinterested, he is insulted. It is a bit like trying to explain scientific evolution to a dyed-in-the-wool religious nutter creationist. It is a colossal waste of time..and comes across as arrogant and insulting. He’d much rather hear: “ok, this is what I want..and I know this is what you want. What can you live with?” without all of the attempts to change one’s philosophy.

So, you had the classical “thinker” vs. “wheeler/dealer” mismatch. And there is something else.

McConnell worked long and hard to turn his talents (and yes, he has them) into personal success…he just had a Gollum like focus on being the MAJORITY LEADER. And here comes a young freshman Senator onto the scene and just blows past him as if he was standing still. And he has to know that Obama will go down in history as one of the most loved politicians where he will be remembered by mostly political junkies and as an answer to trivia questions: “which Senator lead the most filibusters?”, etc.

That HAS to sting. 🙂

Yes, Senator McConnell. You had a lot of victories. But you lost the World Series, and President Obama won. 🙂